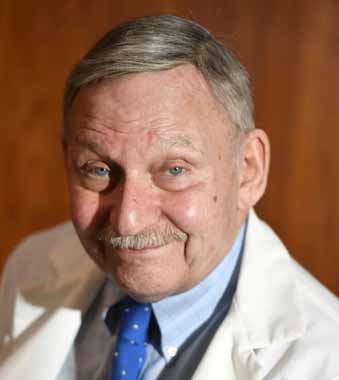 Robert J. Sokol, M.D., originally from Rochester, New York, graduated with highest distinction in philosophy and from medical school with honor from the University of Rochester. He was elected to Phi Beta Kappa and Alpha Omega Alpha. After residency training at Washington University/Barnes Hospital in St. Louis and serving as Dr. Willard Allen’s last Executive Chief Resident, he served in the Air Force as Major and then completed a fellowship in Maternal-Fetal Medicine, as well as joining the faculty, first at the University of Rochester and then at Metrohealth in Cleveland with Dr. Mortimer Rosen. He worked his way up to Professor and Director of the Perinatal Clinical Research Center. Recruited as Chair of the Department of Obstetrics and Gynecology at the Wayne State University School of Medicine/Detroit Medical Center in 1983, he served as Dean and Senior Vice President for Medical Affairs from 1988 until 1999. During his tenure, the National Science Foundation research ranking of the Wayne State University School of Medicine rose from the 70s to #22 of 125 medical schools in the country. Since stepping down as Dean, Dr. Sokol serves as Director of the C.S. Mott Center for Human Growth and Development in the Department of Ob/Gyn at Wayne.

Dr. Sokol is considered an internationally recognized expert on the subject of fetal alcohol syndrome. He established and directed the National Institutes of Health-funded WSU Fetal Alcohol Research Center in 1986 until 1997, which was the only one in the country at the time. His expertise in maternal-fetal medicine, addiction medicine and in medical computing is widely recognized. He has authored or co-authored nearly 300 refereed papers and currently is focused on prevention methodology. Listed as a “Best Doctor” for many years, Dr. Sokol’s many honors include having been appointed to the WSU Academy of Scholars and having served as President. He remains active in the graduate and continuing medical education, as well as in graduate student education, and represents Wayne State University School of Medicine at the American Medical Association. He has served as the President of the Society for Maternal-Fetal Medicine and of the Central Association of Obstetricians and Gynecologists; he chaired the Liaison Committee for Obstetrics and Gynecology and now currently serves as Editor-in-Chief of the ACOG UPDATE, the monthly audio CME publication. Throughout its existence, he served as liaison member of the National Task Force on Fetal Alcohol Syndrome/Fetal Alcohol Effects, managed by the CDC (similar to an NIH Council), representing ACOG. He was the Founding Chair of the SMFM Foundation and was honored with an award for his outstanding “dedication and leadership.” He continues to serve on many committees, boards and development activities.

His work, focused primarily on the adverse consequences of prenatal alcohol and drug exposure, as well as other perinatal risks, has been supported with approximately $200 million in grants and contracts, mainly from NIH. He is currently Project Manager for services in support of the Perinatology Research Branch of the NICHD as well as PI for Obstetrics for the Michigan Alliance for the National Children’s Study. He has received 15 national research awards, as well as a Lifetime Achievement Award from the Society of Maternal-Fetal Medicine.

As a senior research administrator, Dr. Sokol is completing the process of assembling the necessary building blocks, including ~$18 million in renovations, the Reproductive Sciences concentration in the Physiology doctoral program, the WSU Applied Genomics Technology Center and new faculty lines, to create a unique program in Systems Biology in reproductive and perinatal medicine.

Major personal interests include theatre, music, photography and fine arts. Married to Roberta for 43 years, they have 3 children (all physicians) and 4 grandchildren.

A complete list of Dr. Sokol's publications can be found at PubMed-Sokol