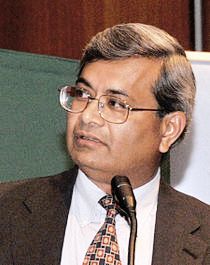 I was born in Jajpur, a small town in Orissa, India, on November 1, 1955, to Manju and Prafulla Jena. I spent my early childhood in several remote villages in Orissa, where my grandfather practiced medicine. The dedication of my father and grandfather to science and medicine and their service to humanity greatly influenced me to choose a career in science. I majored in Chemistry, Zoology, and Botany, from BJB College in Orissa, India (B.Sc., 1975) and studied Reproductive Endocrinology at Utkal University, (M.Sc., 1978). I graduated in the top of my graduating class in the Masters of Science program, and received the Prasant Ku. Memorial Prize and the Utkal University Gold Medal. In December of 1988, I received my Ph.D. degree in Reproductive Endocrinology, and the Research Excellence Award from Iowa State University. Following postdoctoral training at Iowa State and Yale Universities (1988-1994), I joined Yale University, as an Assistant Professor, and in 2000, I moved to the Department of Physiology, at Wayne State University School of Medicine, as a tenured full Professor, and Founder-Director of the Institute of NanoBioScience. In 2004, I was conferred the George E. Palade University Professor, named after the great cell biologist George E. Palade. I am the only living University Professor, and the second in Wayne State University's 160-year history, conferred by the board of governors and former Wayne State University President Dr. Irvin D. Reid.

I am accepting new MS students for the 2020-21 academic year.

Since high school, my passion has been to understand the workings of the unit of life, 'the cell'. At a very early age, I was fascinated by the complexity of such a tiny entity 'the cell' in electron micrographs, similar to the complexity of a city, yet every aspect of its operation precisely organized and coordinated. My scientific enquiry on how cells secrete, led to the discovery of the 'porosome' -a new cellular structure and a molecular nanomachine, demonstrated to be the universal secretory machinery in cells. Currently, the major focus of my laboratory is to further determine the structure and conformation of the neuronal porosome using electron crystallography, X-ray solution scattering, and other approaches.

Throughout my career, I have been fortunate to avail the opportunity to learn from great teachers and scholars, and to work with wonderful students and colleagues. My family has been a great source of peace and inspiration in my life.

Primary focus of my laboratory: is to understand how cells secrete. While the conventional model required that secretion from cells involved the complete merger of the secretory vesicle membrane with the cell plasma membrane, an increase in the number of partially spent vesicles in cells following secretion imaged by EM, suggested the presence of an additional mechanism that would allow for controlled partial discharge of intra-vesicular contents during secretion. This new mechanism would require secretory vesicles to transiently establish continuity with the cell plasma membrane, expel a portion of their contents, and disengage from the cell membrane. In the early 1990's, with the goal of identifying the cellular machinery at the plasma membrane involved in this regulated fractional release of intra-vesicular contents, we employed the then new technique of atomic force microscopy to image the nano scale morphology of the cell surface, and demonstrated the presence of supramolecular cup-shaped secretory portals at the cell plasma membrane. In the ensuing years, using a combination of molecular biology, biochemistry, electrophysiology, conventional EM, mass spectrometry, and X-ray solution analysis, the structure, dynamics, isolation, composition, and the functional reconstitution of the secretory portal has been completed. We later named this specialized secretory portal 'porosome'. The discovery of the porosome overturned traditional views on how cells secrete, and a number of laboratories including our own have established its presence and function in exocrine cells, endocrine cells, astrocytes, and neurons. Our recent studies using mass spectrometry, demonstrate interaction between the cystic fibrosis trans-membrane conductance regulator (CFTR) and the porosome complex in human airways epithelia. This new information sheds light on the possible regulatory role of CFTR on the quality of mucus secretion via the porosome complex, providing critical insights into the etiology of CF disease and for potential therapies.

Second major focus of my laboratory: Throughout our studies, we have continually engaged in the design and development of new approaches, techniques, and instrumentation, for problem solving in biology. For example, during the course of our studies, the successful use of optical traps in trapping single secretory vesicles measuring 100-1000 nm in diameter within live cells, and examining their dynamics under various physiological states, motivated the concept of a force microscope. This force microscope will be capable of imaging intracellular structure-function non-invasively at nm resolution and in real-time, combined with the capability to assess various chemical and biophysical properties within live cells. On the successful development of this microscope, we can begin to explore properties of living cells with a previously unavailable degree of precision, establishing a new paradigm in biomedical investigation. For example, acquiring the fundamental knowledge from 3D maps of the cell cytosolic pH, viscoelasticity, and the distribution of various proteins, will provide an understanding of how cells are able to maintain different pH domains in the cell, even in the absence of membrane boundaries. Similarly, changes in size and stiffness of various sub-cellular organelles will provide valuable information on cellular function, disease progression, and various pathologies. Stimulation of cell secretion for example is known to induce swelling of secretory vesicles in cells. Impaired vesicle volume and elasticity, combined with a drop in cytosolic pH in pancreatic acinar cells for example, would suggest a progression toward pancreatitis. Similarly, an increase in the stiffness of the red blood cell (RBC) membrane is a marker for iron deficiency, while a decrease in membrane stiffness suggests an increase in membrane cholesterol levels, leading to RBC malfunction as well as an early predictor of various cardiovascular pathologies.

My research has been primarily supported by funds from the NIH and NSF. I have more than 30 years of instructional experience and course development both at the graduate and undergraduate level. I have taught courses in cell biology, nanoscience/nanomedicine, general physiology, endocrinology, and biochemistry.

A complete list of Dr. Jena's publications can be found at PubMed-Jena